The aim of this study has been to estimate the carbon footprint of bread produced and consumed in the UK. Sliced white and wholemeal bread has been considered for these purposes and the functional unit is defined as “one loaf of sliced bread (800 g) consumed at home”. The influence on the carbon footprint of several parameters has been analysed, including country of origin of wheat (UK, Canada, France, Germany, Spain and USA), type of flour (white, brown and wholemeal) and type of packaging (plastic and paper bags). The effect on the results of the type of data (primary and secondary) has also been considered.

The carbon footprint has been estimated in accordance with the PAS 2050 methodology. The results have also been calculated following the ISO 14044 methodology to identify any differences in the two approaches and the results. Primary data for the PAS 2050-compliant study have been collected from a UK bread supply chain. Secondary data have been sourced from the UK statistics, life cycle inventory databases and other published sources.

The carbon footprint results range from 977 to 1,244 g CO2 eq. per loaf of bread. Wholemeal thick-sliced bread packaged in plastic bags has the lowest carbon footprint and white medium-sliced bread in paper bag the highest. The main hot spots are wheat cultivation and consumption of bread (refrigerated storage and toasting), contributing 35% and 25% to the total, respectively.

The carbon footprint could be reduced on average by 25% by avoiding toasting and refrigerated storage of bread. Further reductions (5–10%) could be achieved by reducing the amount of waste bread discarded by consumers. The contribution of transport and packaging to the overall results is small. Similar trends in the results are also found in the study based on the secondary data and following the ISO 14044 methodology.
Advertisement
previous article Uncertainties in the carbon footprint of refined wheat products: a case study on Swedish pasta
next article A comparison of cut roses from Ecuador and the Netherlands 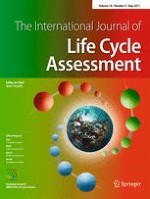 A conceptual framework for impact assessment within SLCA

Recycling in buildings: an LCA case study of a thermal insulation panel made of polyester fiber, recycled from post-consumer PET bottles

A comparison of cut roses from Ecuador and the Netherlands