Inequality Regimes, Patriarchal Connectivity, and the Elusive Right to Own Land for Women in Pakistan | springerprofessional.de Skip to main content
SEARCH MENU 1 2 3 4

This study addresses the gap between policy and practice on the issue of women’s right to own rural land through a qualitative study conducted in Pakistan’s two largest provinces, Punjab and Sindh. A recent survey finds that only 4% of women own rural land in Pakistan. Given the relatively large agrarian economy, land is a key resource determining women’s agency. To understand the dynamics that maintain this status quo, I use two distinct strands of feminist theory. First is Joan Acker’s organizational theory of gender and class structures, to explore the inequality regimes embedded in rural patriarchy. Second, I adapt Suad Joseph’s conceptualization of patriarchal connectivity to show how in rural Pakistan, valorizing kinship works to exclude women from matters pertaining to land and silencing demands for their inheritances. This framework simultaneously allows for a fine-grained analysis of the politico-economic and social structures of rural society, while building an intimate understanding of familial relations. The findings show how land is discursively defined as a collective good to ensure that landed patriarchs remain entrenched within the political and economic order of the state, limiting possibilities, for women, of acquiring agency through owning and controlling rural land. The study also upends the widespread myth of Islamic misogyny, for it demonstrates the political economy of patriarchal domination over religion in Pakistan.
Advertisement
previous article From Fear to Courage: Indian Lesbians’ and Gays’ Quest for Inclusive Ethical Organizations
next article Ambedkar, Radical Interdependence and Dignity: A Study of Women Mall Janitors in India

Title
Inequality Regimes, Patriarchal Connectivity, and the Elusive Right to Own Land for Women in Pakistan
Author
Ghazal Mir Zulfiqar 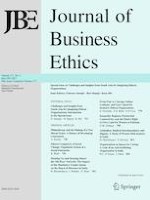 Organizations as Spaces for Caring: A Case of an Anti-trafficking Organization in India

Philanthropy and the Making of a New Moral Order: A History of Developing Community

Why Disability Mainstreaming is Good for Business: A New Narrative

A National Governance Approach to the Political Nature and Role of Business: Case Study of the Mobile Telecommunications Industry in Afghanistan

From Fear to Courage: Indian Lesbians’ and Gays’ Quest for Inclusive Ethical Organizations