Integration of electromagnetic (EM) wave absorber with patch antenna array on single substrate provides a very efficient way to improve the radiation pattern of array by reducing mutual coupling effect. The placing of absorber on array assembly may however affect the radiation characteristics due to the heat generated from absorbed power. As the microwave absorber dissipates the inter-element waves in terms of heat via absorption, the ambient temperature of array increases which consequently varies the patch dimensions and dielectric properties of the substrate thus shifting the resonant frequency of array. These effects have been investigated for graphene oxide-based absorber loaded rectangular patch array designed on different substrates such as silicon, gallium arsenide, aluminium oxide and Roger RO3210. On the basis of percentage variation in return loss and effective bandwidth an optimum substrate is proposed which undergoes minimize temperature effect without deteriorating the gain and directivity of the antenna array. The results show that for Graphene oxide-based absorber with Roger RO3210 substrate having high melting temperature of 4236.85 °C, side lobe level of array is reduced from 3.737 dB to 2.551 dB with increased major lobe gain. Due to absorbed power, ambient temperature of array increased from room temperature (27 °C) to 187 °C significantly shifting the resonant frequency from 10.4 GHz to 8.9 GHz. Further the comparison results show that with aluminium oxide substrate the array exhibits minimum temperature sensitivity hence proving to be a better choice for design of microwave absorber loaded antenna array.
Advertisement
previous article Experimental validation of resource allocation in transport network slicing using the ADRENALINE testbed
next article Threshold optimization for modified switching scheme of hybrid FSO/RF system in the presence of strong atmospheric turbulence 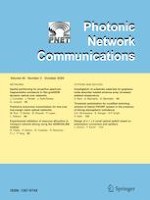