Create an alert for Water Resources Management now and receive an email for each new issue with an overview and direct links to all articles.

Water resources scarcity and competition among stakeholders in water allocation always highlights the optimal operation of water resources. This research examines the operation of a multi-purpose water reservoir aiming at providing agricultural, urban, industrial and environmental demands. A new evolutionary Hybrid Algorithm (integrating Bat Algorithm (BA) and Particle Swarm Algorithm (PSA)) first specified total monthly water release ​​to meet the total monthly needs (agricultural, urban, industrial and environmental) to operate the optimal reservoir. The new Hybrid Algorithm (HA) helps BA and PSA to increase the convergence rate and achieve an optimal absolute response by eliminating the weak responses of one algorithm and substituting the strong responses of the other algorithm. Released water was then allocated to different demands based on the proportional method in the Game Theory (GT). The optimal operation of Shahid Dam Reservoir in Fars, southern Iran is the case study of this research, which has been a serious challenge for decision makers to meet various water demands. The convergence rate of HA was more than that of BA and PSA based on the results. Moreover, the HA with volumetric reliability of 0.92, 0.89, 0.79 and 0.75 was used to meet the urban, environmental, agricultural and industrial demands; while, the volumetric reliability indices of BA and PSA were less than the HA. Also, the mean water release values by the HA met different demands much better than BA and PSA in a period of five years.
Advertisement
previous article Decomposing the Changes in Water Intensity in a Mediterranean Region
next article Decomposition-ANN Methods for Long-Term Discharge Prediction Based on Fisher’s Ordered Clustering with MESA 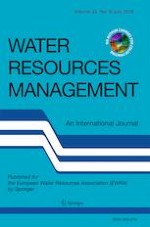