Solution to the Three-Dimensional Problem on the Thermal Stress State of Hollow Shells with Rigid and Sliding Contacts of Layers | springerprofessional.de Skip to main content
SEARCH MENU 1 2 3 4

The authors have developed two approaches to investigating the thermal stress state of layered composite hollow shells. The face surfaces of the shell layers have zero torsional curvature, the variation in principal curvatures is neglected. The coefficients of the first quadratic form are assumed to be unity. It is assumed that the radii of curvature are much larger than the thickness of the structure, and its outer surfaces have the same curvature. The restrictions allow one to identify the curvilinear system of orthogonal coordinates with the planar system of orthogonal coordinates. Based on Hooke’s law, the missing longitudinal components of the stress tensor are obtained. Using the Reissner variational principle, a system of integro-differential equations of equilibrium is written down (for the case of joint support in the temperature load distribution under the trigonometric law). Moreover, it is transformed into a system of ordinary differential equations for the distribution of required functions over the thickness of the hollow shell. This system is solved analytically, with the functions in the form of an exponent, searching for the roots of homogeneous algebraic characteristic equations and their eigenvectors. The integration constants are on the conditions on the outer surfaces of the layers. In compliance with the second approach, the polynomial approximation of the functions to be searched by the thickness of the hollow shell is applied. The peculiarity of this approach is the attribution of the unknown functions to the outer surfaces of the layers, which allows one to partition them into sublayers with a corresponding reduction of the approximation error. The convergence of the calculation results from the two proposed approaches can confirm their reliability.
Advertisement
previous article Thermal Deformation of Woven Composites at High Temperatures
next article Experimental Procedure for the In-Shear Adhesive Strength Evaluation Under High-Frequency Cyclic Loading 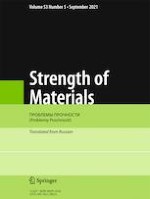