The flow pattern and the velocity distribution of a liquid metal in the flow control mold (FC-mold) were investigated with a mercury model by analogy to the molten steel during continuous casting. The velocity measurement was conducted by the ultrasonic Doppler velocimeter (UDV) under various magnetic distributions and flux densities. The impingement intensity and the scouring intensity of the liquid metal to the narrow wall of the mold were calculated based on the measured data, and the influence of the magnetic flux density on the liquid metal flow in the mold was analyzed. The results showed that the surface of the liquid metal became more active when only the lower magnet was assembled, and the surface fluctuation was suppressed when further applying the upper magnetic field. It was indicated that when the upper and lower magnetic flux densities were 0.18 T and 0.5 T, respectively, the optimum conditions could be obtained, under which the free surface fluctuation could be suppressed, and a flow recirculation could rapidly form. 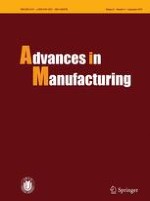 Modeling and state of charge estimation of lithium-ion battery