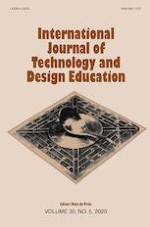 Cultivating the next generation designers: group work in urban and regional design education

Teaching history for design at TU Delft: exploring types of student learning and perceived relevance of history for the architecture profession