The security of data communicated through wireless networks is a challenging issue due to the presence of malicious and unauthenticated users whose intention is either to disrupt the communication or to know context of the data communicated to perform data theft and prevent the communication made by genuine users. To address this problem, a new secure routing algorithm with a novel encryption scheme is proposed in this paper using the cyclic group based Elliptic curve cryptography in which an encryption key is formed from the points taken from the Beta and Gamma functions in the elliptic key cryptography. For this purpose, the elliptic key is encrypted using the proposed encryption and decryption schemes. Further, it is proved that the proposed model decreases the computational complexity and increases the security, when it is compared to the other signature schemes. This scheme has been tested both analytically and using computer implementation of the proposed secure routing algorithm for wireless sensor networks. It is proved that this proposed scheme is more reliable in providing security than the existing algorithms. The cyclic group used in this work makes the number of elements to be from a finite set of integers and hence the computational complexity is reduced and finite. The experiments have been carried out using Python coding and by transmitting different number of words through the wireless network. It is found that overall complexity for encryption and communication is less in this proposed algorithm than the existing Elliptic Curve Cryptography algorithm. 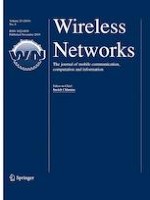 LiMCA: an optimal clustering algorithm for lifetime maximization of internet of things