Hydrological runoff impacts on the accumulation of floatable litter in river system have not been extensively studied in Malaysia. Thus, the aim of this paper was to identify the variation on the accumulation of floatable litter load and its composition at floating debris boom (FDB) structure through the process of hydrological runoff. 14 days of passive sampling was performed periodically using the bucket conveyer machine. The rainfall event prior to the sampling date was used in Soil Conservation Service curve number (SCS-CN) method to generate the runoff volume. The results revealed that the highest accumulation of floatable litter load was 4654.60 kg/day during the first sampling. The plastic and organic waste load were recorded as the highest composition load with 881.50 kg/day during first sampling and 501.00 kg/day during second sampling, respectively. The floatable litter transport was demonstrated through the relationship between cumulative floatable litter loads and cumulative hydrological runoff during the first sampling with R2 = 0.9572, r = 0.978 (p < 0.01); and second sampling with R2 = 0.9806, r = 0.990 (p < 0.01). Such data will contribute to knowledge and serve as baseline data information for the relevant agencies in ameliorating this environmental issue in long term planning. 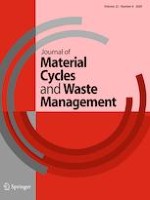