An experiment was conducted to investigate the flow structures in the compressible starting jet from two beveled nozzles (45\(^{\circ }\) and 30\(^{\circ }\) nozzle angles) of a shock tube using the schlieren technique. In the present study, the pressure ratios between the driver section and the driven section (PR) of 3.5, 7, and 10.5 corresponding to the shock wave Mach numbers (\(M_\mathrm{s}\)) of 1.28, 1.48, and 1.59 were applied to produce three types of compressible vortex rings (CVRs). Owing to the beveled nozzle, the shock wave diffracts twice to produce two coaxial CVRs. For PR = 3.5 with 45\(^{\circ }\) beveled nozzle, two shock-free CVRs are formed and merged into one primary CVR, while the two CVRs are separated from each other for the 30\(^{\circ }\) beveled nozzle. The main reason is that the strength of the secondary CVR generated from the 30\(^{\circ }\) beveled nozzle is much lower than that of the leading CVR. As for PR =7 and 10.5, the embedded shock and counter-rotating vortex rings (CRVRs) appear and constraint the formation of the secondary CVR. As a result, the two CVRs are merged into a primary CVR at a very early stage. In addition, for the two different beveled nozzles, the embedded shock–CVR, CRVR–CVR, and shock cell-trailing vortices interactions are observed and exhibited some differences. Moreover, by identifying the position of the primary CVR, it is found that the propagation velocity of the primary CVR generated from the beveled nozzles is significantly slower than that from a straight nozzle. 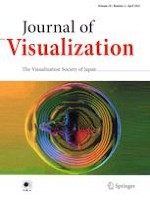 Examining interaction techniques in data visualization authoring tools from the perspective of goals and human cognition: a survey