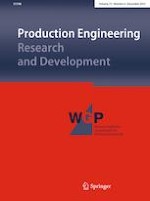 Correction to: Modeling of cutting forces in trochoidal milling with respect to wear-dependent topographic changes