The role of method: some parting thoughts from a departing editor | springerprofessional.de Skip to main content
TOOLBAR 1 2 3 4
SEARCH MENU 1 2 3 4

“We must not forget that when radium was discovered no one knew that it would prove useful in hospitals. The work was one of pure science. And this is a proof that scientific work must not be considered from the point of view of the direct usefulness of it. It must be done for itself, for the beauty of science, and then there is always the chance that a scientific discovery may become like the radium a benefit for humanity.”

Title
The role of method: some parting thoughts from a departing editor
Author:
David W. Stewart 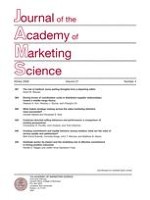 Gratitude works: its impact and the mediating role of affective commitment in driving positive outcomes

Antecedents and consequences of environmental stewardship in boundary-spanning B2B teams

Susceptibility to and impact of interpersonal influence in an investment context

Creating commitment and loyalty behavior among retailers: what are the roles of service quality and satisfaction?

Driving forces of coordination costs in distributor–supplier relationships: toward a middle-range theory