» Jetzt Zugang zum Volltext erhalten
Wichtige Hinweise
This work was partly supported by Campus France under the PHC Gallileo 2015-2016 Number 32272UL. This manuscript has been authored, in part, by UT-Battelle, LLC, under Contract No. DE-AC0500OR22725 with the U.S. Department of Energy. The United States Government retains and the publisher, by accepting the article for publication, acknowledges that the United States Government retains a non-exclusive, paid-up, irrevocable, world-wide license to publish or reproduce the published form of this manuscript, or allow others to do so, for the United States Government purposes. The Department of Energy will provide public access to these results of federally sponsored research in accordance with the DOE Public Access Plan (http://​energy.​gov/​downloads/​doe-public-access-plan). The research of C.H. was sponsored by the Office of Advanced Scientific Computing Research and performed at the Oak Ridge National Laboratory, which is managed by UT-Battelle, LLC under Contract No. DE-AC05-00OR22725.

We introduce an extension of the fast semi-Lagrangian scheme developed in J Comput Phys 255:680–698 (2013) in an effort to increase the spatial accuracy of the method. The basic idea of this extension is to modify the first-order accurate transport step of the original semi-Lagrangian scheme to allow for a general piecewise polynomial reconstruction of the distribution function. For each discrete velocity, we update the solution not at cell centers, but rather at the extreme points of the spatial reconstruction, the locations of which are different for each discrete velocity and change with time. Several approaches are discussed for evaluating the collision operator at these extreme points using only cell center values by making special assumption on the spatial variation of the collision operator. The result is a class of schemes that preserves the structure of the solution over very long times when compared to existing schemes in the literature. As a proof of concept, the new method is implemented in a one-dimensional setting, using piecewise linear reconstructions of the distribution function together with a related reconstruction of the collision operator. The method is derived both for the relatively simple Bhatnagar–Gross–Krook (BGK) operator as well as for the classical Boltzmann operator. Several numerical tests are used to assess the performance of the implementation, including comparisons with the original method in J Comput Phys 255:680–698 (2013) and with classical semi-Lagrangian methods of first and second order. In convergence tests, we observe uniform second-order accuracy across all flow regimes for the BGK operator and nearly second-order accuracy for the Boltzmann operator. In addition, we observe that the method outperforms the classical semi-Lagrangian approach, in particular when resolving fine solution structures in space. 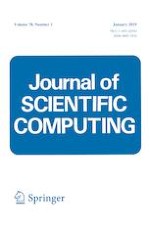