» Zum Volltext PDF-Version jetzt herunterladen
Wichtige Hinweise
The authors acknowledge access to linked data resources (DO 1995–2011) by Statistics Netherlands (CBS). We are grateful to seminar participants at Erasmus University Rotterdam, University of York and the Paris School of Economics and participants of the IUSSP workshop on Causal Mediation Analysis on Health and Work in Rostock for helpful comments. This study was part of a research supported by U.S. National Institutes of Health, Grant RO1-AG028593 (Principal Investigator: L. H. Lumey). Andrew Jones acknowledges funding from the Leverhulme Trust Major Research Fellowship (MR-2016-004).

Large differences in mortality rates across those with different levels of education are a well-established fact. Cognitive ability may be affected by education so that it becomes a mediating factor in the causal chain. In this paper, we estimate the impact of education on mortality using inverse-probability-weighted (IPW) estimators. We develop an IPW estimator to analyse the mediating effect in the context of survival models. Our estimates are based on administrative data, on men born between 1944 and 1947 who were examined for military service in the Netherlands between 1961 and 1965, linked to national death records. For these men, we distinguish four education levels and we make pairwise comparisons. The results show that levels of education have hardly any impact on the mortality rate. Using the mediation method, we only find a significant effect of education on mortality running through cognitive ability, for the lowest education group that amounts to a 15% reduction in the mortality rate. For the highest education group, we find a significant effect of education on mortality through other pathways of 12%. 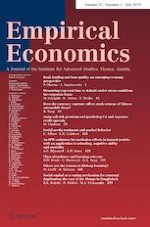 On the wage–productivity causal relationship