Large amounts of heavy metal are released by mining and industrial activities to the surrounding environment, raising great concerns regarding the effects of environmental exposure to pollutants on human health. A combination of total and bioaccessible contents, spatial analysis, cluster analysis, and positive matrix factorization model was successfully used to determine the status and sources of heavy metals in a small farmland under long-term influences of mining and industries activities in this study. The results show that the average contents of arsenic (As), cadmium (Cd), lead (Pb), and zinc (Zn) in agricultural soils exceed the Chinese national standard 2.18, 5.95, 3.46, and 1.33 times, respectively. Cd poses the highest potential on human health with a mean geo-accumulation index (Igeo) of 4.51 and a bioaccessible ratio of 37.41%, followed by Pb, which has a mean Igeo of 1.58 and a bioaccessible ratio of 63.24%. The significant correlation (P < 0.01) was found between the total and bioaccessible four contaminated metal contents (As, Cd, Pb, and Zn), indicating that total concentration of heavy metals could be effective indicators on bioaccessibility in this study. The As was attributed to the atmospheric deposition, Cd and Zn were mainly derived from mining activities, and Pb contamination is highly related with cement plant. Compared to atmospheric deposition, industrial activities, and soil parent materials, mining activities has the greatest influence on the enrichments of the total heavy metals in agricultural soils with the proportion of 47.9%. 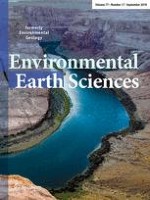 Correction to: Effects of the morphology of sediment-transporting channels on the erosion and deposition of debris flows

Petrographic investigations in cemeteries in Dresden: a scientific view on the tombstone inventory including historic and cultural aspects