Competitive tendering was introduced in the contract segment of the Norwegian taxi industry in 2005; a market characterised by entry regulation. Using this reform as a natural experiment this research looks into how competitive tendering has resulted in different outcomes in different segments of the taxi market and which explanations are best at describing the results.

The main sources of data are the taximeter data and case studies, conducted as part of a study of the rural taxi industry in Norway. This data have been supplemented by interviews with key stakeholders and data on prices and volumes from various purchasers of transport services, such as health corporations and county governments.

The empirical data shows a lot of variation. There are very different outcomes in the different cases studied. However, the research shows that competitive tendering has mostly worked according to intention in the most central regions. These are characterised by many potential suppliers and that the tendered contracts are relative small compared with the total size of the market. I rural areas the results differ, with poor results from tendering in the intermediate areas and mostly satisfactory results in the most rural areas. 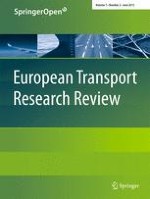 Review of remote sensing methodologies for pavement management and assessment