In the Ziz Basin, located in arid area in southeastern Morocco, surface waters are scarce and local populations are entirely dependent on groundwater resources for drinking and irrigation. In order to evaluate the main factors controlling the origin and salinization of groundwater resources, we have investigated the chemical and stable isotope compositions of groundwater and surface water in different areas in the Ziz basin, upstream and downstream from the Hassan Addakhil dam, which is the major man-made reservoir in the basin. A large variation in water quality was observed, specifically an increase in salinity from north (upstream to the reservoir with TDS ~ 460 mg/L) to south (downstream; TDS ~ 16,000 mg/L). In the northern portion of the basin, the low saline groundwater is composed primarily of Ca2+ and Mg2+ due to dissolution of carbonate formations in the High Atlas Mountains. In contrast, the major dissolved consequents of saline waters are Cl−, SO4 2− and Na+, apparently due to dissolution of evaporite minerals (gypsum and halite). In some areas elevated nitrate contents imply anthropogenic contamination derived from local agriculture. The stable isotopes data (δ18O = −8.6 to −8.3 ‰ and δ2H = −55.7 to −53.8 ‰) indicate that the High Atlas Mountains, upstream of the reservoir constitute the major source of water to the Ziz Basin. Given that this arid basin is entirely dependent on groundwater resources, long-term salinization of groundwater in the Ziz Basin could lead to negative effects and reduction of the local agricultural productivity in addition to the degradation of drinking water quality in this region. 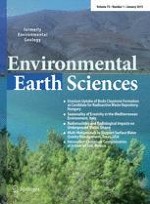 Hydrogeochemical characteristics and associated mechanism based on groundwater dating in a karstic basin, Guizhou Province, China

Evaluation of the physico-chemical properties of groundwater from shallow wells in Enugu town, Nigeria

Assessment of hydrologic impacts of climate change on the runoff trend in Klang Watershed, Malaysia