This paper examines regulatory responses to the presence of previously undetected and unlabelled nanoparticles in the Australian food system. Until 2015, the Australian regulatory body Food Standards Australia New Zealand (FSANZ) denied that nanoparticles were present in Australian food. However, and despite repeated claims from Australia’s food regulator, research commissioned by civil society group Friends of the Earth has demonstrated that nanoparticles are deliberately included as ingredients in an array of food available for sale in Australia. This paper critically examines how nanoparticles have come to be integrated into Australia’s food system under the radar of Australia’s food regulator. Our case study of FSANZ—including its responses to the civil society-led science that determined the existence of nanoparticles in Australian food—raises a number of important questions about the governance of risk in relation to emerging technologies such as nanotechnology. In this paper, we argue that FSANZ’ response to the presence of nanotechnology in Australia’s food system is an example of ‘governing with ignorance’. This is demonstrated via the denial and dismissal of science claims as a basis for limited regulatory intervention. FSANZ’ response intersects with the centrality of commercial interests in shaping science research and commercialisation, alongside the ‘hands off’ approach to regulation that is characteristic of neoliberal governance approaches. We conclude by arguing that in the current food governance framework, and alongside a paucity of impact science, civil society plays a vital role in attempts to democratise the Australian food system. 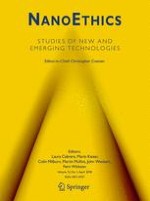 Discussions of Risk and New Approaches to Responsible Research and Innovation

Ethics in Technology: a Philosophical Study

Nanotechnology and Risk Governance in the European Union: the Constitution of Safety in Highly Promoted and Contested Innovation Areas

How to Address the Policy and Ethical Issues Emerging with New Technology. The Case of Synthetic Biology in a Small Country