Longwall coal mining causes a large scale of subsidence in both overlying strata and ground surface. No matter where subsidence or deformation happened, its damaging effects to underground mining work or surface infrastructures are not anticipated. To accurately predict surface subsidence over the mining area, surface subsidence prediction models based on influence function method are developed. Based on the surface subsidence model, in this paper, a prediction model for overlying strata movements is developed with innovatively optimizing three key parameters used for setting the boundary condition. A load is derived using the beam theory with the simple overlying strata model, which is important for getting the radius of major influence, one of the three key parameters. Many features of progress subsidence are reproduced in the model and finally found to fit reasonably well with numerical simulation results using the same geological parameters. The modelling study reveals that the newly proposed subsurface model is flexible and versatile to represent the subsurface subsidence profile under various possible conditions. The key strata, especially the hard rock strata, act like an elastic beam and can overhang the load from above strata so that the displacement of rock mass or stress distribution in strata will be drastically changed when close to key strata. The proposed subsurface subsidence prediction model discloses some basic laws of overlying strata subsidence with the mining of coal seam. 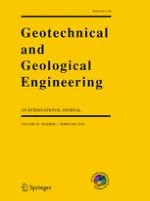 The Use of Nanoclay Particles for Stabilization of Dispersive Clayey Soils