A wealth of experimental data indicate that while capillarity-controlled infiltration gives an infiltration length that varies with the square root of time, reactive infiltration is characterized by a linear relationship between the two magnitudes. In addition, the infiltration rate in the latter is at least two orders of magnitude lower than in the former. This work is addressed to investigate imbibition of a non-wetting, albeit reactive, liquid into a capillary, within the framework of a simple model that includes capillarity effects, viscosity and gravity. The capillary radius is allowed to vary, due to reaction, with both position and time, according to either an interface or a diffusion law. The model allows for capillary closure when reaction kinetics dominates imbibition. At short times, and depending on whether infiltration is capillarity or gravity controlled, the infiltrated length varies either as the square root or linearly with time. This suggests the following track for reactive infiltration: (1) In most cases, the contact angle is initially larger than \(90^\circ \), (2) after some time, reaction gradually replaces the interface liquid/preform by the liquid/reaction product interface and, concomitantly, the contact angle gets closer to \(90^\circ \), (3) beyond that time, gravity triggers infiltration (actually the contact angle does not need to be smaller than \(90^\circ \) for the initiation of infiltration due to the metallostatic pressure exerted by the liquid metal on top of the porous preform) and (4) thereafter, infiltration is controlled by viscosity and gravity, provided that, due to reaction, the contact angle remains close to that at which infiltration was initiated. 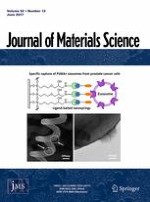 Enhanced photocatalytic degradation of tetrabromobisphenol A by tourmaline–TiO2 composite catalyst