Nanocrystalline N–Zn/TiO2 anode films were prepared by doping element N and Zn. These element-doped films have a better performance in dye-sensitized solar cell than the non-doped film. The test shows that the best thickness of N–Zn/TiO2 anode film is 13.5 μm. UV–Visible measurements show that there is a complementarity in ultraviolet–visible absorbance range between P3OT and N719, both are used as dyes in this study, the former is prepared and the latter is commercially available. SEM shows a significant mass increase of anode film after treated with TiCl4. Solar cells based on N–Zn/TiO2 anode film with TiCl4 treatment was firstly co-sensitized by N719/P3OT. A solar-to-electric energy conversion efficiency of 3.54 % was obtained. Compared with the traditional dye-sensitized solar cell, the photoelectric conversion efficiency, V oc and J sc have been increased. 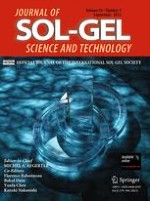 Towards an atomistic model for ORMOCER®-I: application of forcefield methods