In time series context, estimation and testing issues with autoregressive and moving average (ARMA) models are well understood. Similar issues in the context of spatial ARMA models for the disturbance of the regression, however, remain largely unexplored. In this paper, we discuss the problems of testing no spatial dependence in the disturbances against the alternative of spatial ARMA process incorporating the possible presence of spatial dependence in the dependent variable. The problems of conducting such a test are twofold. First, under the null hypothesis, the nuisance parameter is not identified, resulting in a singular information matrix (IM), which is a nonregular case in statistical inference. To take account of singular IM, we follow Davies (Biometrika 64(2):247–254, 1977; Biometrika 74(1):33–43, 1987) and propose a test procedure based on the supremum of the Rao score test statistic. Second, the possible presence of spatial lag dependence will have adverse effect on the performance of the test. Using the general test procedure of Bera and Yoon (Econom Theory 9:649–658, 1993) under local misspecification, we avoid the explicit estimation of the spatial autoregressive parameter. Thus our suggested tests are entirely based on ordinary least squares estimation. Tests suggested here can be viewed as a generalization of Anselin et al. (Reg Sci Urban Econ 26:77–104, 1996). We conduct Monte Carlo simulations to investigate the finite sample properties of the proposed tests. Simulation results show that our tests have good finite sample properties both in terms of size and power, compared to other tests in the literature. We also illustrate the applications of our tests through several data sets. 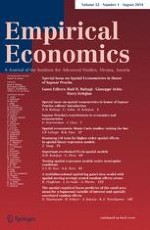 Testing inequality of opportunities in Italy using the ANOVA framework