Reverse mortgage (RM) borrowers may get benefit from terminating the contract by selling their house early. For analyzing the termination rate, the authors investigate the rules that govern an elder’s decision to sell a house early. The decision is found to be influenced by the strength of the elder’s desire to stay in the home, the uncertainty of the elder’s death time, and the stochastic price of the house. To more thoroughly elucidate changes in the probability of a sale over time, the authors provide an example illustrating how one can use this decision rule to calculate the probability distribution for selling a house early. Sensitivity analyses are provided to show the influence of the model’s parameters on this distribution. Evidence that the model estimates the termination rate more accurately than the traditional model is also provided. The authors’ investigation should not only help RM lenders better understand the RM borrower’s decision-making process but also help them accurately estimate the RM’s termination rate.

Titel
A Microeconomic Model for the Decision of Reverse Mortgage Borrowers to Sell their House Early and its Application on the Estimation of Termination Rates
Autoren:
Shu Ling Chiang
Ming Shann Tsai 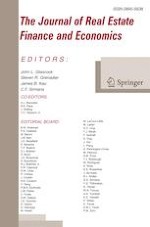 The Impact of Density Rezoning in a Small College Town