Immigrants to the United States walk, bicycle, and use transit and carpools more than U.S.-born residents do. These differences persist over time and across income groups. The differences appear strongest when immigrants reside in immigrant neighborhoods with high concentrations of other immigrants. This analysis uses a large, geocoded national dataset to analyze these differences and finds that living in an immigrant neighborhood has a strong influence on mode choice for immigrant residents and a much weaker effect on non-immigrant residents of immigrant neighborhoods. These effects are strongest for walking and bicycling, and particularly for shopping-related travel, and they persist after controlling for a number of variables. That these effects are considerably stronger for immigrants than for their U.S.-born neighbors suggests that social factors of the neighborhoods may play a role in structuring travel decisions. 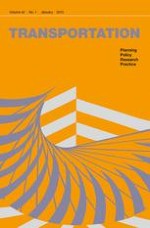 An investigation on mode choice and travel distance demand of older people in the National Capital Region (NCR) of Canada: application of a utility theoretic joint econometric model

Mood and mode: does how we travel affect how we feel?

The estimation of changes in rail ridership through an onboard survey: did free Wi-Fi make a difference to Amtrak’s Capitol Corridor service?