With the continuous socio-economic development, the Chinese government has readjusted its poverty alleviation and development strategies, and established the targeted poverty alleviation policies in an attempt to holistically build a well-off society. Based on the panel data of nine national poverty-stricken counties (districts) in Chongqing in the Three Gorges Reservoir Region from 1998 to 2015, this paper quantitatively analyzed the effect of the national poverty alleviation policies in the context of targeted poverty alleviation by adopting the methodologies of a break-point regression and a panel regression. The results show that: (1) The national policy for targeted poverty alleviation has a significant effect on poverty reduction, and this effect has manifested since the beginning of its implementation, i.e. the net income of farmers in 2012 increased by 12.41%, as against that during 2010–2011. The per capita net income of farmers has increased by 33.64% from 2011 to 2015 during the implementation period of the targeted poverty alleviation policy, as against that during 1998–2010. The policy effect during 2011–2015 is also evident, for the net income of farmers increased by 21.23% compared with that from the beginning of the policy implementation in 2012; (2) Economic activity of the market and gross value of agricultural product in the poverty-stricken areas have significantly increased farmers’ net income, specifically, for every 1% increase in the degree of market economic activity, farmers’ net income will increase by 48.74%; Furthermore, for every 1% increase in gross value of agricultural product, the farmers’ net income will increase by 3.7%. Finally, this paper proposed corresponding policy recommendations based on these findings. 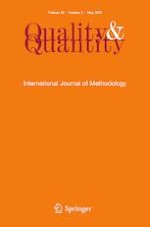 The information revolution, innovation diffusion and economic growth: an examination of causal links in European countries

Sustainability, welfare and efficiency of nations

A comparison of five reflective–formative estimation approaches: reconsideration and recommendations for tourism research