Investigating the spatiotemporal distribution of climate data and their impact on the allocation of the regional aridity and meteorological drought, particularly in semi-arid and arid climate, it is critical to evaluate the climate variability effect and propose sufficient adaptation strategies. The coefficient of variation, precipitation concentration index and anomaly index were used to evaluate the climate variability, while the Mann-Kendall and Sen’s slope were applied for trend analysis, together with homogeneity tests. The aridity was evaluated using the alpha form of the reconnaissance drought index (Mohammed & Scholz, Water Resour Manag 31(1):531–538, 2017c), whereas drought episodes were predicted by applying three of the commonly used meteorological drought indices, which are the standardised reconnaissance drought index, standardized precipitation index and standardized precipitation evapotranspiration index. The Upper Zab River Basin (UZRB), which is located in the northern part of Iraq and covers a high range of climate variability, has been considered as an illustrative basin for arid and semi-arid climatic conditions. There were general increasing trends in average temperature and potential evapotranspiration and decreasing trends in precipitation from the upstream to the downstream of the UZRB. The long-term analysis of climate data indicates that the number of dry years has temporally risen and the basin has experienced succeeding years of drought, particularly after 1994/1995. There was a potential link between drought, aridity and climate variability. Pettitt’s, SNHT, Buishand’s and von Neumann’s homogeneity test results demonstrated that there is an evident alteration in the mean of the drought and aridity between the pre- and post-alteration point (1994). 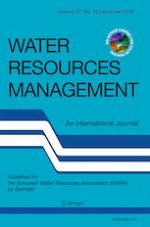 Analyzing the Variability in Low-Flow Projections under GCM CMIP5 Scenarios

Simulating the Effects of Reservoir Management Strategies on Fluvial Erosion