Bamboo, softwood, and hardwood pulp fibers were used as starting materials to prepare TEMPO-oxidized nanofibrillated cellulose (TO-NFC) dispersions. The resulting TO-NFC dispersions were then used to fabricate cellulose nanopapers and to coat poly(lactic acid) (PLA) films. The chemical and morphological characteristics of the dispersions together with the physical properties of the resultant nanopaper and PLA films were systematically compared. The maximum degree of oxidation was achieved for the bamboo pulp fiber. Transmission electron microscopy micrographs revealed that the oxidized pulp fibers were successfully disintegrated into cellulose nanofibrils with an average width of 5–6 nm. However, bamboo-derived TO-NFC was more densely entangled and crimped, with a heterogeneous distribution in width. It was further revealed that morphologies of the obtained TO-NFC may arise from the organizational structure of microfibrils in the cellulose fibers rather than the presence of hemicelluloses or the pulping process. The PLA films coated with a thin layer of TO-NFC from the bamboo pulp exhibited the highest oxygen-barrier property, which was even slightly higher than commercial ethylene–vinyl alcohol copolymer film, known for its high oxygen-barrier functionality. 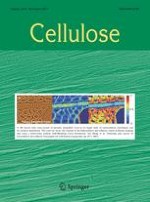