The overall objective of this study was to explore the current (i.e., at the time of the study) and past (i.e., over their lifetimes) happiness of 65-year-old and older men and women who had different personal and socio-demographic characteristics. We also investigated the role of affect balance and life satisfaction as sources of participants’ subjective well-being, as well as the contribution of other psychosocial variables, including self-efficacy, optimism, health and quality of life, stress, social support and leisure, and of socio-demographic conditions. Further, we examined the influence of institutionalisation on happiness and on the aforementioned psychosocial variables. Participants voluntarily completed self-reports regarding all of these variables. Participants’ current happiness (M = 6.6 on a 0–10 scale) was significantly lower than their past happiness (M = 7.7). The happiness of the institutionalised participants did not differ from that of the non-institutionalised participants, although significant differences were found for a number of psychosocial variables. Affect balance and life satisfaction were significant correlates and predictors of current happiness, which was also associated with many psychosocial variables and was further predicted by past happiness, health indicators and some life dimensions assessed as perceived sources of one’s own happiness, such as a sense of autonomy and independence. Our results highlight the importance of establishing both happiness and its correlates to develop interventions aimed at promoting subjective well-being in older people, given that, compared to earlier periods in life, happiness may be reduced in late adulthood. 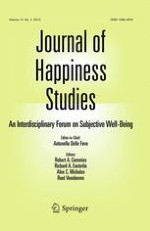 The Effects of Positive Interventions on Happiness and Depressive Symptoms, with an Examination of Personality as a Moderator

Adult Children’s Caregiver Burden and Depression: The Moderating Roles of Parent–Child Relationship Satisfaction and Feedback from Others

Toward a Better Understanding of the Relationship Between Friendship and Happiness: Perceived Responses to Capitalization Attempts, Feelings of Mattering, and Satisfaction of Basic Psychological Needs in Same-Sex Best Friendships as Predictors of Happiness

Exploring the Causes of Subjective Well-Being: A Content Analysis of Peoples’ Recipes for Long-Term Happiness

How Do Educational Attainment and Occupational and Wage-Earner Statuses Affect Life Satisfaction? A Gender Perspective Study