This paper presents a simplified analytical approach for computing the required reinforcement tensile force of the geosynthetic reinforced soil walls subjected to earthquake loads using the method of horizontal slices. In the analysis, the earthquake load is taken into account by following the pseudo-static approach. The proposed formulation considers the equilibrium of potential failure mass bounded by a nonlinear slip surface similar to that observed in the earlier experimental investigation. The effects of pseudo-static seismic acceleration in horizontal and vertical directions, as well as the friction angle along the soil–wall interface, have been considered in the analysis. It has been found that the computed values of total tensile force required by the geosynthetic reinforcements from the present study compare favorably well with the methods reported in the literature. Furthermore, the present approach is straightforward and can be easily implemented through a simple spreadsheet application. 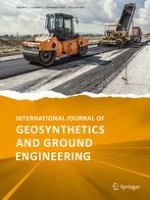 Effect of Anisotropy on Cyclic Properties of Chennai Marine Clay

Experimental Study on the Load-Carrying Capacity of Single Stone Columns