Platelet adhesion, activation, and aggregation play important roles in pathological thrombosis and the progression of atherosclerosis. In our previous study, it was observed that the probability of platelet adhesion increased under high-hematocrit conditions. The present study aimed to investigate how the interactions between hemodynamic properties and platelet adhesion around stenosed channels varied according to the hematocrit level. After passing through the narrow stenotic channels with different stenotic widths (100, 50, and 10 μm), the platelets were activated, and then these platelets were adhered on the downstream of the stenosis. Flow information, such as the velocity field and shear rate around the stenotic channels, was estimated by using particle image velocimetry (PIV) measurements and simulations. By using a Y-shaped device, the viscosity variations according to the shear rate could be measured for samples with different hematocrit levels (0, 30, and 50%). Based on the estimated flow and viscosity information, the distribution of shear stress around the stenotic channels was estimated. Due to the high shear stress in the 10-μm-wide stenosis, significant adhesion of platelets with a 3D circulating motion was observed at the posterior end of the stenosis. In the 50-μm-wide stenosis, the degree of platelet adhesion varied according to the hematocrit levels; the area of the adhered platelets increased as the hematocrit of the sample increased. Thus, in relatively high-viscosity conditions, frequent particle collision can contribute to the promotion of platelet activation and adhesion, even when the shear rate is relatively low. This study provides a better understanding of the effect of the hematocrit level on the adhesion of platelets after they pass through a stenosis. 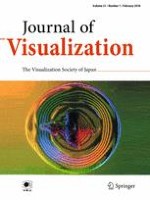 Near-field interaction of an inclined jet with a crossflow: LIF visualization and TR-PIV measurement