This paper proposes a distributed model predictive control method for a consensus of robotic swarm systems. The proposed method is free from any precomputed trajectories, contrast to previous studies. This is huge advantages in cases the system do not work as previously predicted, communication topology changes frequently, and the communication is unreliable. I introduce a concept of local subsystem regulator first, and then the distributed control method and its design concept are described. I also analyze stability of the proposed method and introduce how to handle constraints such as a mutual collision avoidance into the proposed method. Computer simulations are demonstrated to show effectivity of our method. 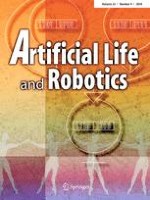