DNA templated gold wires (AuWs) were fabricated on Pt sputtered ITO (Pt/ITO) substrates using ‘scribing’ or ‘writing’ method to be used as a modified counter electrode (CE) in Dye sensitized solar cells. The gold nanoparticles (AuNPs) bind to DNA in aqueous solution due to the polyanionic nature of DNA. When a scribe is made on the dropcasted Au-DNA solution, the diffusion of Au-DNA complex occurs towards the edges of the scribe due to the coffee ring effect. Capillary force induces evaporation of water that also forces the Au-DNA complex to migrate towards the scribed edges. Meanwhile, the AuNPs are reduced on the surface of DNA to form active seed for nucleation and growth of AuWs. DNA molecules act as a scaffold to arrange the nanoparticles into well-connected submicron to nanoscale wires. The cyclic voltammetry measurements showed that AuWs/Pt/ITO CE exhibited better electro-catalytic activity and higher conductivity than conventional Pt/ITO CE due to the synergistic effect of Pt and AuWs network on ITO. The DSSC fabricated using TiO2 photoanode, N719 dye, I3 −/I− electrolyte and AuWs/Pt/ITO CE showed a 36% increase in efficiency as compared to the cells made under same parameters but using conventional (Pt/ITO) CE. 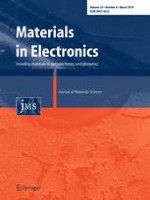