Currently, there are naturalized populations of feral pigeon (Columba livia var. domestica) worldwide with an estimated global population between 165 and 330 million individuals. Feral pigeons are adapted to urban environments, creating problems related to human health, damage to architectural structures, unpleasant soiling, and foul odors. Thus, local governments usually implement measures to reduce feral pigeon populations in cities to a suitable size. We monitored a feral pigeon trapping campaign to investigate the use of cage traps as control method in residential zones. We analyzed efficiency (daily capture rate), effectiveness (defined as the number of feral pigeons captured relative to the total number of potential pigeon captures), animal welfare, selectivity (the proportion of captured feral pigeons in relation to the total number of captured animals), and the effect on feral pigeon abundance. All procedures were conducted in compliance with current European and Spanish legislation. Overall efficiency was 0.25 feral pigeons/trap-day, effectiveness was 22.5%, and selectivity was 99.7%. Over the study period, there was a decreasing trend in abundances. A significant decrease was found in the relative abundances of feral pigeons after 2 months of extractions, and population abundances remained low up to the end of the extraction period. The use of cage traps was a useful and effective method to reduce local feral pigeon populations in isolated urban areas with low building density in which the feral pigeon population has not yet reached high densities. 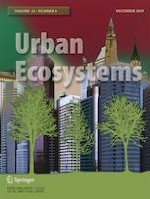 Juggling a “junk-food” diet: responses of an urban bird to fluctuating anthropogenic-food availability

The influence of garden flowers on pollinator visits to forest flowers: comparison of bumblebee habitat use between urban and natural areas

Designing and modeling innovation across scales for urban water systems