This work presents a numerical study of incompressible, laminar, two-dimensional, mixed convection flows in horizontal channels with two rectangular alternated blocks mounted in the surfaces. The influence of the geometry and positioning of the blocks on the heat transfer rate is evaluated using Constructal Design. The problem is subjected to two geometric constraints associated with the areas of the channel and the two blocks and three degrees of freedom: \(H_{1}/L_{1}\) (the ratio of the height to the width of the upstream block), \(H_{2}/L_{2}\) (the ratio of the height to the width of the downstream block), and \(L_{3}\) (the horizontal distance between the centers of the blocks). The purpose is to maximize the heat transfer rate per length unit \(q'\) considering three different Reynolds (\(Re_{H}= 10\), 100, and 200) and Grashof numbers (\(Gr_{H} = 650\), 6,500, and 65,000). The conservation equations of mass, momentum, and energy are solved using the Finite Volume Method, and the buoyance forces are modeled with the Boussinesq approximation. In general, the best performance is reached for the largest intrusion of the blocks. However, changes in \(Gr_{H}\) and \(Re_{H}\) affected the optimal distance (\(L_{3})_{o}\), and for \(Gr_{H}=65,000\) non-symmetrical blocks led to the best performance, showing the importance of design investigation for different flow conditions. 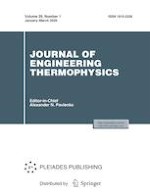