Logging and human-induced conversion of natural forests into agricultural areas are major drivers of biodiversity loss in the tropics. Anuran larvae can be highly diverse, can reach high biomass and can play important roles in tropical streams; yet, compared to the adult frog communities, relatively little is known about how larval communities respond to disturbance. Information on larvae is highly relevant for amphibian conservation because larvae represent direct evidence of breeding and thus provide a good indicator of species persistence in disturbed habitats. We studied tadpole assemblages in Ranomafana, southeastern part of Madagascar, in streams in a disturbed forest (previously logged forest), at “forest edge” (streams embedded in matrix nearby forest blocks), and compared these to communities in a primary forest. We sampled tadpoles at the microhabitat level (“pools” and “riffles”) in 9 streams. We recorded 27 species with a maximum of 17 species/stream recorded at edge. The three habitats harbored different assemblages, but, as could be expected, more similarities existed among forest habitats than between forest and non-forest habitats. The most and the least diverse communities were recorded at edge and in the disturbed forest, respectively. Assemblages were dominated by one generalist species, and changes in communities were mostly driven by changes in forest specialists, which either decreased in disturbed forest or were replaced by edge specialists outside forest. Although species richness varied, relative abundances were maintained among habitats, suggesting potential compensatory mechanisms in tadpole biomass. Community structure changed at the microhabitat level: pool environments usually harbored relatively higher species richness and abundance than riffles. Our study highlights the relevance of edge habitats for maintaining amphibian diversity and the pronounced negative effects of past logging activities on tadpole communities. Given the diverse roles of tadpoles in streams, changes in community structure potentially affect critical stream ecosystem processes. The study has strong implications for designing buffer zones around protected areas. 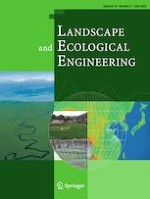