There has recently been a rising interest in the nonlinear wave transmission behavior of phononic crystals. However, experimental studies focusing on the nonlinear wave transmission behavior of phononic crystals have been predominantly performed on 1-D granular crystals using customized impact apparatus. In this study, we explore split Hopkinson pressure bar (SHPB) apparatus as a tool to study the nonlinear wave characteristics of a 1-D continuum viscoelastic phononic crystal. In order to resolve experimental challenges relating to signal-to-noise ratios and input impulse magnitudes, we propose a hybrid SHPB system composed of an aluminum input bar and a nylon output bar. For a considered viscoelastic phononic crystal, the application of the hybrid SHPB apparatus enabled us to observe some low transmission frequency zones, which were not identified from the linearly perturbed settings such as the analytical solution and the electrodynamic shaker tests. We further conducted a series of additional FE simulations to ensure the appearance of impulse-dependent low transmission frequency zones of the considered viscoelastic phononic crystal specimen. The additional sets of simulations evidently illustrate the impulse-dependent evolution of wave transmission coefficients, and demonstrate that the impulse-dependent wave transmission behavior can be experimentally investigated by adopting the hybrid SHPB apparatus. Thus, this study shows that the conventional SHPB apparatus can be employed effectively to study the emerging research field of nonlinear wave characteristics of phononic crystals. 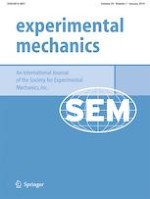