As regards the usage of PC computers in college classrooms, new research shows that they can actually increase students’ engagement, attentiveness, participation and learning. However, computer employed in the classroom may entail the following adverse effects:
Current research at the Multimedia Systems Department is intended to prove the following thesis: “technology developments can lead us toward a more natural way of using computers in general, especially in classrooms”.
Anzeige
In order to let computers to be used in a more natural and spontaneous way, they should fulfill the following demands:
In order to satisfy above demands, some new ways of human-computer-interfacing should be pursued. In turn, in the technology layer their realization demands solving problems requiring a simulation of intelligent thought processes, heuristics and applications of knowledge. In particular children with so called “special educational needs”, i.e. children with various types of disabilities (communication senses problems, limb paralysis, infantile paralysis, partial mental retardation and others) can potentially benefit much from the availability of intelligent solutions helping them to learn using computers. The needs of partially impaired children motivated us at the Gdansk University of Technology to develop a prototype series of multimodal interfaces some of which are presented in this paper.

The following milestones can be identified in the history of man-computing machine communication:
Still it is natural human tendency to speak, gesticulate and sometimes use handwriting, when communication is needed, thus various solutions in this domain appear on the market since 90’s until present, including tablets with touch sensitive screen and others. Nowadays natural forms of communication are the most desired and interfaces using those are known as multimodal interfaces.
Anzeige
The subject is not a new one, however, many notions related to multimodal interfaces were hitherto conceived, including the following ones:
The term multimodal consists of two components, namely: multiplicity and modality, where modality it is the way of transferring and receiving information. There are several kinds of information in the communication, e.g.:
The multimodal systems can be divided into unimodal systems—those using only one modality e.g. speech recognition or text recognition or multimodal systems—those using several modalities as an input signal, e.g. speech recognition with simultaneous gesture capture. Applications of multimodal systems are widespread most in education to provide help to pupils with special needs, including:
Currently Multimedia Systems Department is carrying out several research projects dealing with multimodal interfaces in a direct co-operation with industrial partners. Human senses: sight, hearing, touch and smell are involved. Moreover, gesture recognition with video camera image analysis is employed in many applications. The recognition based on image processing is nowadays research focus—much effort is put on eliminating the need of usage of all wire connections, sensors, gloves or other additional tools.
A common feature of all developed system is that their engineering demand non-deterministic problem solving in algorithmic and especially signal processing layers. Thus, the technology layer realization demands solving problems requiring applications of heuristics, soft computing or in general: knowledge-base systems.

Interactive electronic whiteboards may be an effective support for students who need to see the material presented again, or are absent from school, for struggling learners, and for children with special educational needs. The disadvantage of typical electronic whiteboards is their price which is partly the result of the necessity of using electronic pens and large frames equipped with sensors. To improve whiteboard content controlling in cases the system uses a camera, vision-based gesture recognition approach can be applied. Some attempts in this domain were presented in papers of others researchers, e.g. Xu and Yi ( 2008), Maes and Mistry ( 2009) and Mistry and Maes ( 2009). Authors of the last recalled paper used a portable projector for the content displaying and a webcam. The equipment can be mounted on a helmet worn by the user. Special colorful tips are used on fingers to provide gesture controlling.
The system developed at the Multimedia Systems Department by Lech and Kostek ( 2010a) provides the functionality of electronic whiteboards and its essential feature is lack of the necessity of using any special manipulators or sensors. Moreover, the whiteboard content can be handled (e.g. zoomed in / out, rotated) by dynamic hand gestures. Data gloves (cyber gloves) or special tips on fingers are not needed.
The hardware part of the system is presented in Fig.  1. It is composed of a PC (dual core), a multimedia projector, a webcam and a screen for projected image. The webcam is attached to the multimedia projector in such a way that both lenses are directed at the projection screen.
×

Representing a gesture as a singular change of speed and direction over particular time interval often led to interpreting it as moving hand up—in the beginning phase of the movement—or as moving hand down—in the ending phase. Therefore, the movement trajectory in the second approach has been modeled by motion vectors created for points at time moments t 1 and t 2, in relation to the moments t 0 and t 1, respectively, as presented in Fig.  2 and gestures were analyzed considering a possibility of a local change of direction. Time intervals t 1 −  t 0 and t 2 −  t 1, expressed in the number of frames retrieved from a camera, depend on camera frame rate (Lech and Kostek 2010a).
Fuzzy rules were defined based on speed and direction of motion vector over time interval t 2 −  t 1 and t 1 −  t 0 separately for left and right hand. Eight linguistic variables were proposed, i.e.: speed of left and right hand over time interval t 2 −  t 1, speed of left and right hand over time interval t 1 −  t 0, direction of left and right hand over time interval t 2 −  t 1, direction of left and right hand over time interval t 1 −  t 0, denoted as \(\upsilon_{21}^{L}\), \(\upsilon_{21}^{R}\), \(\upsilon_{10}^{L}\), \(\upsilon_{10}^{R}\), \(d_{21}^{L}\), \(d_{21}^{R}\), \(d_{10}^{L}\), \(d_{10}^{R}\), respectively. Four linguistic terms were used for speed, i.e.: very small, small (denoted later as vsmall), medium and large, represented by triangular membership functions as shown in Fig.  4a. The membership functions were identical for all four variables representing speed. For direction the following terms were used: north, east, south and west and also in this case triangular functions were employed as shown in Fig.  4b.
×
The zero-order Takagi–Sugeno fuzzy inference model (Sugeno 1985) which bases on singletons was used to express discrete rule outputs representing gesture classes. The output of the system was the maximum of all rule outputs. When this value was lower than 0.5 a movement was labelled as no gesture. This enabled to efficiently solve the problem of classifying meaningless transitions between each two gestures to one of the gesture classes. The total number of rules equaled 30. Two examples of rules expressed in FCL code are given below (Lech and Kostek 2010a):
The first rule describes the beginning phase of semi-circular left hand movement from right to the left side. Therefore, \(d_{10}^{R}\) is north and \(d_{21}^{R}\) is west. Since the gesture involves left hand only, the speed of the right hand should be very small. If the right hand is not present in an image, 0.0 values are given as an input to the fuzzy inference system for variables \(\upsilon_{21}^{R}\) and \(\upsilon_{10}^{R}\). The second rule represents the gesture associated with rotating the displayed object. During the gesture performing, the left hand moves down and the right hand moves up. No local change of direction is allowed. For this reason, both \(d_{21}^{L}\) and \(d_{10}^{L}\) are south and \(d_{21}^{R}\), \(d_{10}^{R}\) are north. While making gestures involving both hands, speed of each hand movement can be lower than when performing a single hand gesture. Therefore, contrary to the first rule the second one allows for small speed.
Again 20 persons took part in tests. Each person was asked to repeat each gesture 18 times. Among these 18 repetitions 10 middle gesture representations were chosen. Since the system analyzes motion vectors for time intervals t 2 −  t 1 and t 1 −  t 0 in relation to each obtained camera frame, among each gesture representations there were many assignments to the particular gesture class. Sample results of a comparison between fuzzy rule-based recognition and recognition based on fixed thresholds with the analysis of the global motion vector change are presented in Table  2.
Table 2
Gesture recognition effectiveness for the system employing fuzzy inference and without a module of fuzzy inference, for one hand gestures (%)

Research funded within the project no. POIG.01.03.01-22-017/08, entitled “Elaboration of a series of multimodal interfaces and their implementation to educational, medical, security and industrial applications”. The project is subsidized by the European Regional Development Fund and by the Polish State Budget. 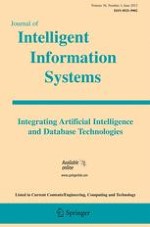 In & out zooming on time-aware user/tag clusters