A stress application method in delayed fracture susceptibility tests was investigated using 1450 MPa class tempered martensitic steel. Its fracture mode under hydrogen charging was mainly intergranular because of its relatively small Si content of 0.21 mass pct. The conditions for consistency in fracture strength between tensile tests and constant load tests (CLTs) were clarified: first, to conduct hydrogen precharging before stress application; and second, to choose a sufficiently low crosshead speed in tensile tests. When hydrogen precharging was not conducted before CLTs, the fracture strength was higher than the values in CLTs with hydrogen charging and in tensile tests. If the crosshead speed was too high, the fracture strength obtained was higher than the values in CLTs. The dependence of the fracture strength on crosshead speed was seen for both notched and smooth bar specimens. These results suggested that plastic deformation, i.e., dislocation motion, was related to intergranular fracture with a tear pattern as well as to quasi-cleavage fracture. In addition, cathodic electrolysis in an alkaline solution containing NaOH should be used as the hydrogen charging method to avoid the effects of corrosion. 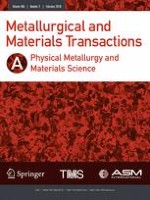