The mixed alkali effects of Li2O, Na2O, and K2O on viscosity of CaO-SiO2-Al2O3 melts are investigated by rotating cylinder method. It is found that the single addition of Li2O, Na2O, or K2O to CaO-SiO2-Al2O3 melt will reduce the viscosity of melt, regardless of the Al2O3 content, while the degree of reduction follows the sequence of Li2O > Na2O > K2O. For melts containing two alkali oxides, viscosity monotonically decreases when one alkali oxide is replaced by another at all temperature investigated in this paper, but no extrema of viscosity is found like the behavior of electrical conductivity. In addition, the extrema are not found in the slag containing three alkali oxides if changing their relative contents but keeping their total contents constant. Raman spectroscopy is used to illustrate the relationship between viscosity and structure of melt and it is found that degree of polymerization is the major factor affecting the viscosity of melt. 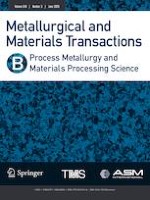 The Influence of Temperature on the Gas/Slag/Matte/Spinel Equilibria in the Cu-Fe-O-S-Si System at Fixed P(SO2) = 0.25 atm