Smoke release data from the cone calorimeter are often underused. They may provide additional information to better understand the fire reaction of polymers and the efficiency of flame retardants. A new method is proposed to investigate the smoke release in cone calorimeter tests and to correlate it to heat release, based on studies with pure and flame retarded polymers. Smoke release rate is plotted versus heat release rate and new parameters are pointed out. In particular, parameter A represents the smoke release per unit energy (in Joules) released. Its value increases when the carbon fraction and the aromaticity of a polymer increase. It can reach around 0.05 m2/kJ for epoxy resins but is null for well-known smoke-free polyoxymethylene (POM). HRR threshold (HRRth) represents the critical heat release rate above which smoke release is measured. Its value is close to 100 kW/m2 for polyolefins but decreases drastically for aromatic polymers. The approach developed in this study is potentially useful for assessing the smoke release of different materials for a heat release rate scenario chosen arbitrarily. The influence of two specific smoke suppressants and of two specific flame retardants on smoke release is also discussed and the proposed method allows for a better understanding of their role in smoke release.
Anzeige
Vorheriger Artikel Three Different Fire Suppression Approaches Used by Fire and Rescue Services
Nächster Artikel Experimental Study of Fire Plume Above a Fire Source with Simple Harmonic Oscillation in Horizontal Direction 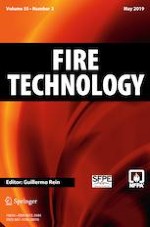