The shear deformation texture of bcc metals is characterized by the Goss orientation, or {110}〈001〉, which is a highly useful orientation for grain-oriented silicon steels because it gives rise to high magnetic permeability along the 〈100〉 direction. To obtain the Goss texture, or {110}〈001〉, in silicon steel sheets, a silicon steel sheet was subjected to an 89 pct reduction in thickness via asymmetric rolling at 750 °C. This step resulted in the well-developed Goss texture. When multiple asymmetrically rolled steel sheets were subsequently annealed, one at 900 °C for 1 hour and the other at 1200 °C for a short period of 5 minutes in a box furnace with air atmosphere, a strong Goss texture was developed in the silicon steel sheets. The texture was measured via X-ray diffraction and electron backscatter diffraction. The magnetization curve of each specimen was measured by the vibrating sample magnetometer and the measured magnetization curve showed the typical soft magnetic characteristics. 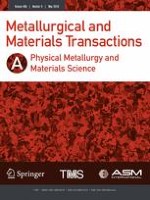 Tensile Properties and Deformation Mechanisms of Haynes 282 at Various Temperatures

The Recrystallization Behavior of Unalloyed Mg and a Mg-Al Alloy