We study the effect of phase separation in multi-component mixing at super-critical conditions using a novel framework based on vapor-liquid equilibrium (VLE) thermodynamics in a real gas mixture. This approach is combined with a non-conservative Double-Flux (DF) numerical model to overcome numerical instabilities that arise when high-pressure, low-temperature mixtures are considered. The formulation developed and validated can handle VLE in multi-component mixtures even though most of the initial studies are focussed on binary mixtures. The challenges to get a robust solution of VLE thermodynamics are highlighted and we demonstrate the ability and the accuracy of the algorithms to account for VLE in canonical test cases, as well as in a shear layer binary mixing in a canonical temporal-mixing layer. Results are also compared against the classical, “dense-fluid” approach where an equation of state (EoS) is used with the assumption of a single-phase within each computational cell. Differences are highlighted and explained from a thermodynamic point of view with emphasis on the relevance and the applicability of VLE. 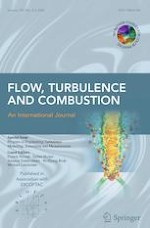 Transitional Flow Dynamics Behind a Micro-Ramp