Integration of multiple sensory cues can improve performance in detection and estimation tasks. There is an open theoretical question of the conditions under which linear or nonlinear cue combination is Bayes-optimal. We demonstrate that a neural population decoded by a population vector requires nonlinear cue combination to approximate Bayesian inference. Specifically, if cues are conditionally independent, multiplicative cue combination is optimal for the population vector. The model was tested on neural and behavioral responses in the barn owl’s sound localization system where space-specific neurons owe their selectivity to multiplicative tuning to sound localization cues interaural phase (IPD) and level (ILD) differences. We found that IPD and ILD cues are approximately conditionally independent. As a result, the multiplicative combination selectivity to IPD and ILD of midbrain space-specific neurons permits a population vector to perform Bayesian cue combination. We further show that this model describes the owl’s localization behavior in azimuth and elevation. This work provides theoretical justification and experimental evidence supporting the optimality of nonlinear cue combination. 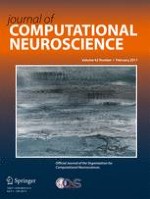 Twenty years of ModelDB and beyond: building essential modeling tools for the future of neuroscience

Modeling the differentiation of A- and C-type baroreceptor firing patterns