Models that predict software artifact co-changes have been proposed to assist developers in altering a software system and they often rely on coupling. However, developers have not yet widely adopted these approaches, presumably because of the high number of false recommendations. In this work, we conjecture that the contextual information related to software changes, which is collected from issues (e.g., issue type and reporter), developers’ communication (e.g., number of issue comments, issue discussants and words in the discussion), and commit metadata (e.g., number of lines added, removed, and modified), improves the accuracy of co-change prediction. We built customized prediction models for each co-change and evaluated the approach on 129 releases from a curated set of 10 Apache Software Foundation projects. Comparing our approach with the widely used association rules as a baseline, we found that contextual information models and association rules provide a similar number of co-change recommendations, but our models achieved a significantly higher F-measure. In particular, we found that contextual information significantly reduces the number of false recommendations compared to the baseline model. We conclude that contextual information is an important source for supporting change prediction and may be used to warn developers when they are about to miss relevant artifacts while performing a software change. 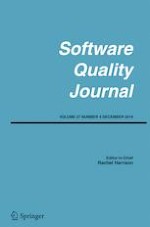 The skills that employers look for in software testers

Analysis and measurement of internal usability metrics through code annotations

A partial oracle for uniformity statistics