The duplex gear, a key component in the transmission system, should be dimensionally accurate in order to function properly. Generally, duplex gears are fabricated through machining or powder metallurgy (PM) methods [ 1]. However, manufacturing efficiency and material utilization rates are low in machining. In the PM method, heat and excess energy are required. Studies have also applied forming methods such as fine blanking [ 2] that require the use of a specific press with three dynamic motions. A significant problem associated with the fine blanking process is the appearance of die roll (shear droop/roll over) in the teeth located in areas I, II, and III as shown in Fig.  1.
×
The existence of the die roll would shorten the working length of a gear; therefore, various methods have been developed for reducing the die roll. Kondo and Maeda [ 3] proposed a different die shearing process in which dual-directional extrusion could be used to achieve a small die roll. Kwak et al. [ 4] analyzed the effects of clearance on the die roll by conducting both theoretical predictions and experimental assessments. Ultrasonic vibration on a punch [ 5] and modified die structure [ 6] were applied during fine blanking to reduce the die roll. In addition, negative clearance could get smaller die roll in fine blanking [ 7]. Tanaka et al. [ 8] reported that a higher blank holding force and counterforce, a higher V-ring, and smaller clearance could be applied to reduce the die roll. Huang et al. [ 9] simulated fine blanking using different punch-die clearance levels; the die roll quality was improved by controlling the material flow in the local area. Luo et al. [ 10] developed a two-step compound fine blanking method that could significantly reduce the die roll of gear teeth. However, all the aforementioned methods proposed for die roll control put emphasis on a single-stage part, as shown in Fig.  1. Few studies have attempted to develop methods for controlling the die roll of area I in the duplex gear.
Anzeige
Recently, a new sheet metal forming concept, applying compressive stress to a sheet to obtain a sheet-shaped part with high-quality functional elements, was proposed [ 11]. In Germany, this concept was called sheet-bulk metal forming (SBMF) [ 12], and in Japan as plate forging [ 13]. To obtain parts with various thicknesses, high accuracy, and complex shapes, material flow is regarded as the main influencing factor. In this study, an SBMF based method was developed to form duplex gear parts with extremely small die rolls in areas I and II, as presented in Fig.  1. To reveal the underground mechanism of small die rolls, experimental setup and numerical model are presented. By analyzing the influence of material flow on the formation of crack in the shearing zone and the die roll evolution of the inner teeth, the principle of die roll reduction is clarified.

A duplex gear was chosen as the target part in this study. Figure  2 shows the gear, where T 1 and t 1 represent the teeth in the outer area and their thickness, respectively; whereas T 2 and t 2 represent the teeth in the shoulder area and their thickness, respectively. The teeth in the shoulder area can be divided into several types as shown in areas A–G. Various tooth types were designed in one part to examine the die roll evolution in different forming stages and validate the generalizability of the proposed method. Table  1 lists the geometric characteristics of the tooth such as gear modulus, tooth length, corner angle, and corner radius.
Table 1
Geometric characteristics related to die roll
×
The forming process is designed to complete in one stroke, and the whole process could be divided into three stages according to the forming features: upsetting and shearing stage, lateral extrusion stage and local filling stage. The principle of the duplex gear forming method is presented in Fig.  3. Firstly, a ring-shaped billet, cut from a sheet with the thickness of t 0, is placed on the stationary die and mandrel. Then, the punch goes down. Once the punch touches the billet, the forming process starts. The teeth of shoulder area are gradually formed by shearing, while the material in the outer area is subject to upsetting, similar to the method proposed by Maeno et al. [ 14] for fabricating the step stainless steel parts. When the material in the outer area is upset to contact the gear surface of the die, lateral extrusion stage is launched. In this stage, divided flow phenomenon is anticipated. Some material starts to flow back to the shoulder area, contributing to the reduction of die roll. When the outer teeth are completely filled, the local filling stage starts to sharply reduce the die roll.
×
Experiments were carried out on an H1F200 servo press. Tool setup is shown in Fig.  4. Aluminum 6061 under fully annealed state is selected as the experimental material. Fifty MISUMI SRBN18-B spring discs are installed to provide the counterforce. The stiffness coefficient for each disc spring is 1 274 N/mm. The spring discs could be of various stacking combinations that offer different floating distances and counterforces. In this study, the spring discs are combined with 0.1 mm shim to create two experimental situations. In one situation, the inner shoulder thickness ( t 2) is larger than t 0; thus, the inner shoulder has been thickened. In another situation, t 2 is equal to t 0; thus, the inner shoulder has not been thickened. The thickness of the sheet billet ( t 0) is 4.1 mm. Table  2 lists the thicknesses of different gear areas in these two situations. For the situation in which the shoulder was thickened ( t 2 >  t 0), the thickened value (Δ t) of the shoulder could be set not only to 0.6 mm, but also other sizes like 0.2 mm and 0.4 mm, while the experiment results showed the same regulations; and in order to make the material flow control influences more clearly, the thickened value (Δ t) was set as 0.6 mm.
Table 2
Thicknesses of different areas in two situations
×
Anzeige
The inner and outer diameters of the ring-shaped billets are 8.0 mm and 27.3 mm, respectively. The billets were lubricated with RENOFORM MZAN 51 H provided by FUCHS.
The direction of the billets is constant as illustrated in Fig.  4, where the black dash line represents the rolling direction of the sheet. Samples prepared in different stages are scanned using ATOS core scanning equipment to measure the die roll. Three samples were tested to demonstrate the repeatability of the proposed method.

The present work put forward a new SBMF method including three stages for fabricating a duplex gear in one stroke. A duplex gear part with extremely small die roll could be obtained through utilizing material flow control during forming. The experiment and simulation draw out the following conclusions:
(i)
By analyzing the velocity in simulation, the critical stroke when the material started divided flow and local filling could be determined. In the situation of unthickened shoulder area, since the stroke reached 92.7%, the material started the divided flow, and when the stroke became 97.6%, the outer area was filled and material was limit to flow into the local area.
(ii)
Die roll in the shoulder area, which appeared in the shearing stage, would be decreased because of the material flow inside the should area. Both lateral extrusion and local filling contribute to the flowing inside of the material.
(iii)
The forming quality is strong related to the material flow. If the material in the shoulder area is too fast or distorted, defects like cracks caused by tension stress would appear in the shearing zone of the duplex gear. It is found that when the shoulder thickness is controlled not to be thickened, the crack in the shearing zone could be avoided. 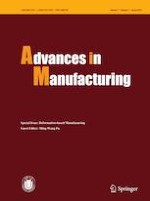 In vitro evaluation of artificial joints: a comprehensive review

Microstructural evolution of a steam-turbine rotor subjected to a water-quenching process: numerical simulation and experimental verification