Whey protein is a particularly well-studied and promising raw material to enhance functionality of packaging materials. However, in recent studies it was observed that several properties of whey protein isolate-based film change within the first weeks after film production. This indicates that certain intrinsic material changes take place during storage time. The overall aim of this study was to explore a time-dependent structure–property relationship of WPI-based coatings. In order to answer this question, time-dependent oxygen permeability measurements, and in addition solubility studies with different defined buffer systems combined with a Bradford assay were performed to determine intermolecular interactions in the film. The measurements clearly showed that oxygen permeability decreased by up to 85 % within 2–3 weeks after film production. The solubility tests confirmed that this decrease in oxygen permeability was accompanied and thus caused by different changes in covalent and non-covalent bonds between the polypeptide chains during storage. Based on the results of the solubility measurements it can be assumed that the cross-linking by disulphide bonds as well as hydrogen bonds is the predominant interaction formed during the first days of storage leading to a fast decrease in oxygen permeability while the importance of hydrogen bonds in relation to disulphide bonds increases during storage time leading to a further—but slower—decrease in oxygen permeability. 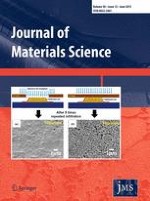