The peak shear strength of a cement-filled hard rock joint is studied by theoretical analysis and laboratory testing. Based on the concept of the shear resistance angle, by combining the statistical method and fractal theory, three new parameters are proposed to characterize the three-dimensional joint morphology, reflecting the effects of the average roughness, multi-scale asperities and the dispersion degree of the roughness distribution. These factors are independent of the measurement scale, and they reflect the anisotropy of the joint roughness. Compressive shear tests are conducted on cement-filled joints. Because joints without cement can be considered special cement-filled joints in which the filling degree of cement is zero, they are also tested. The cement-filled granite joint fails primarily along the granite–cement interfaces. The filling degree of cement controls the joint failure and affects its mechanical behaviour. With a decrease in the filling degree of cement, the joint cohesion decreases; however, the dilatancy angle and the basic friction angle of the interface increase. As the filling degree approaches zero, the cohesion approaches zero, while the dilatancy angle and the basic friction angle increase to those of the joint without cement. A set of formulas is proposed to evaluate the peak shear strength of the joints with and without cement. The formulas are shown to be reasonable by comparison with the tested peak shear strength, and they reflect the anisotropy of the strength. This research deepens the understanding of cement-filled joints and provides a method to evaluate their peak shear strength. 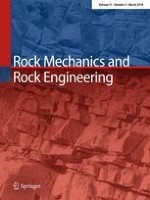