In Northern Mongolia, water resources are stressed by an increasing water demand for water supply in households, agriculture and mining as well as by climate and land-use changes. This study aims to obtain a better understanding of the complex hydrological processes in the semiarid, subarctic Kharaa River Basin (KRB). Therefore, the water balance components and the characteristic patterns of the river hydrograph were systematically analyzed to identify the stream flow generating processes in the catchment. The distributed, physically-based Soil and Water Assessment Tool (SWAT) model was employed for simulation of stream flow under the particular hydrological conditions. During the period 1991–2002, roughly 87 % of precipitation (P = 216–417 mm/year) was lost due to evaporation, leaving only a small portion of water available for stream flow and groundwater recharge. The Kharaa’s hydrograph shows striking recurring patterns. River runoff in summer occurs as a response to strong summer rainfall events while stream flow generation in spring is almost exclusively driven by the melt of snow and river icings. This results in an inter-seasonal redistribution of water resources being effective for stream discharge in spring rather than in winter. Due to frozen soils, stream flow in spring is mainly generated by surface runoff and interflow. The thawing of the active layer during summer allows increased groundwater recharge. Stream flow during winter is reduced by continuously forming aufeis. Our results show that SWAT satisfactorily reflects stream flow for single years but is not reliable for a longer time period. Melt water from snow and icings could not be sufficiently simulated. The analysis reveals that refinements of SWAT are required, e.g. coupling a river ice model in order to deal with the subarctic situation in the KRB. 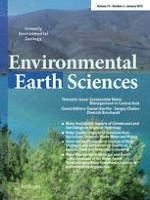 Distribution of Ephemeroptera, Plecoptera, and Trichoptera assemblages in relation to environmental variables in headwater streams of Mongolia