Nikolai Nikolaevich Bondarenko. Started his scientific activity with the development of mathematical models in economics, aircraft engineering, and pharmaceutics. His supervisor was Yu. I. Zhuravlev, Russian mathematician specialized in the algebraic theory of algorithms. His first paper was published in 2012. In 2016, he started to work on his candidate’s dissertation on predicting large commercial structures, including the classification of states at fixed periods of time.

Oleg Valentinovich Sen’ko. Born 1957. Graduated from Moscow Institute of Physics and Technology in 1981. Received candidates degree in 2007. Currently is leading scientist at the Informatics and Control Federal Research Center of the Russian Academy of Sciences. Scientific interests: methods of machine learning and intelligent data analysis and their practical application. Author of more than 100 publications.

Vladimir Vasil’evich Ryazanov. Born 1950. Graduated from the Moscow Institute of Physics and Technology in 1973. Received candidates degree in 1977 and doctoral degree in 1994. Academician of the Russian Academy of Natural Sciences since 1998 and professor since 2008. Since 1976 has been with the Dorodnicyn Computing Centre, Russian Academy of Sciences. Currently is Head of the Department of Methods of Classification and Analysis of Data at the Dorodnicyn Computing Centre, Informatics and Control Federal Research Center, Russian Academy of Sciences. Scientific interests: optimization methods of recognition models, algorithms for searching and processing logical regularities by precedents, mathematical recognition models based on voting by sets of logical regularities of classes, committee synthesis of collective clusterings and construction of stable solutions in clustering problems, restoration of omissions in data, restoration of regressions by the sets of recognition algorithms, development of software classification systems, and solution of practical problems in medicine, engineering, chemistry and other fields. Author of 208 publications.

Aleksandr Petrovich Vinogradov. Born in 1951. Received MS degree in physics from the Department of Applied Mathematics and Control, Moscow Institute of Physics and Technology, in 1974 and candidate’s degree in mathematical cybernetics in 1978. Senior Researcher at the Dorodnicyn Computing Centre, Computer Science and Control Federal Research Center, Russian Academy of Sciences. Author of about 70 scientific papers. Research interests: algebraic and geometrical methods in pattern recognition, image analysis and processing.
Translated by I. Nikitin

A method for predicting rare events by the preceding dynamics of features is considered. The method is analyzed on the example of the problem of predicting revocation of the license of a credit institution on the basis of the reporting indicators published at least six months before the regulator made the appropriate decision. The technology developed is based on the calculation of collective solutions by sets of recognition algorithms. Investigations have shown that the most effective prediction is obtained with the use of collective algorithms involving various types of decision forests and combinatorial and logical methods. The method developed also involves the procedure of ranking the indicators according to their information value, in which the collective ranking is calculated on the basis of information estimates obtained with the use of built-in procedures within individual recognition methods.

Titel
A Method for Predicting Rare Events by Multidimensional Time Series with the Use of Collective Methods
Autoren:
Yu. I. Zhuravlev
O. V. Sen’ko
N. N. Bondarenko
V. V. Ryazanov
A. A. Dokukin
A. P. Vinogradov 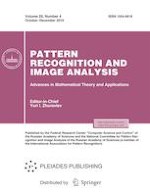 An Efficient Human Activity Recognition Technique Based on Deep Learning