Cationic polyallylamine (PAH), was adsorbed onto lignocellulosic fibres, and a fluorescent label on the polyelectrolyte enabled its location to be shown by confocal fluorescence microscopy. The adsorption time and ionic strength were varied to study their effect on the localisation of the adsorbed PAH. The microscopy showed that a long adsorption time, 24 h, and a high ionic strength, 10−1 M NaCl + 5 × 10−3 M NaHCO3 or higher, resulted in the adsorption of polyallylamine throughout the fibre walls. Shorter adsorption times and/or lower ionic strength resulted in adsorption only to the fibre exterior. By preparing sheets from fibres with polyelectrolyte adsorbed either to the exterior parts or into the fibre cell wall and testing their mechanical behaviour, a link was established between the localisation of adsorbed polyelectrolyte and the mechanical properties. Adsorption to the fibre exterior led to an increase in tensile strength and strain at break. The creep deformation at 90%RH was also slightly reduced by the adsorption of low molecular weight PAH (15 kDa). When polyallylamine was adsorbed throughout the wall of the lignocellulosic fibres, the mechanical properties were not however improved and the creep deformation at 90%RH actually increased somewhat. 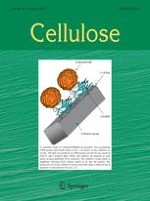 Endoxylanase action towards the improvement of recycled fibre properties